LUCAS AT THE PARALYMPICS 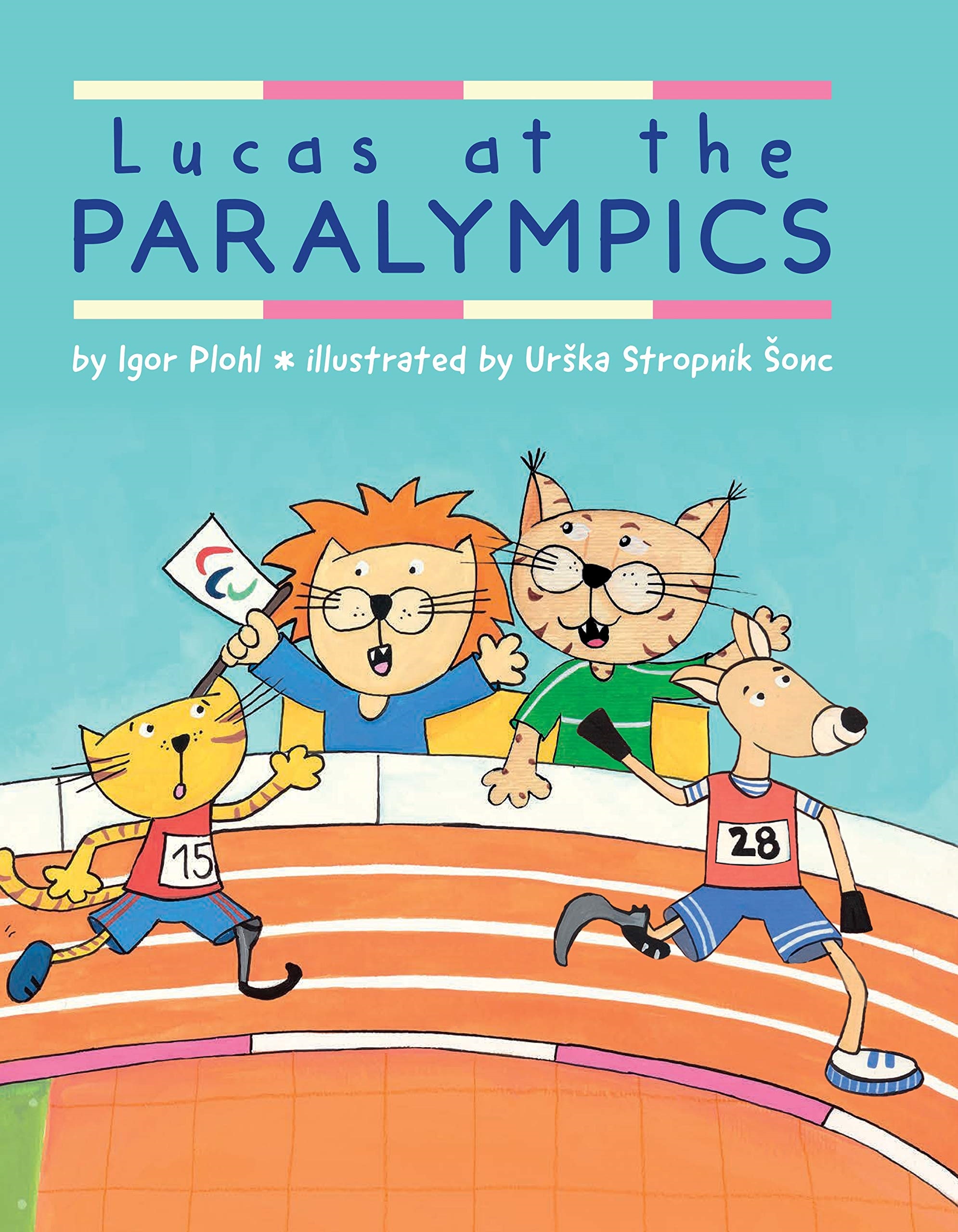 In this story, Lucas the not quite so ordinary lion, who, after falling off a ladder, finds himself having to use a wheelchair, tells us all about the Paralympic Games. His friend, a lynx called Eddie, takes him to the venue of the Paralympics and shows him all the special and interesting things about parasports. They cheer on blind and physically challenged athletes as they compete in running, swimming, sitting volleyball, para archery, wheelchair fencing, wheelchair basketball, goalball, boccia and more.

The author presents information and interesting facts about the various parasports alongside the literary narrative. The text in the picture book is therefore not simply of a literary nature, but also educates the reader in two ways. Firstly, through the story and literary illustrations of Lucas and Eddie, and, secondly, with the framed facts that teach the reader about parasports and include realistic illustrations. Readers learn about some of the rules that expedite play and that even the playing field. For example, blind runners wear blindfolds so none of the competitors (some totally blind and some with limited sight) have an unfair advantage. Also, all of the blind competitors are tethered to guides.

In the first picture book about Lucas, titled Lucas Makes a Comeback, we got to know a not quite so ordinary lion who found himself having to use a wheelchair after being involved in a bad accident. His path to complete independence was a tough one, but thanks to his perseverance, the brave lion made it through and made his life happy again.

In the second picture book about this interesting lion’s life, the author decided to focus the story on sport for the disabled, as Lucas is a passionate athlete.

Since he’s a keen cyclist who likes to get out as much as possible, Lucas was once again cycling outside one day when he met Eddie, a lynx who was also riding a special bicycle. The bike is made so that you can pedal it with your arms! The two became close friends and often went cycling together. One day Eddie invited his friend to the summer Paralympic Games.

Lucas and Eddie travel to the various venues of the summer Paralympic Games and Lucas learns about all the many different parasports that exists, such as para-running and goalball. They go to see the pool where the para-swimming competitions are being held and in which Eddie’s friend is also competing. Jake the Wolf only has one limb, just like all the other competitors in his category. Despite all his efforts and training, Jake wasn't fast enought to win a medal. The wolf was visibly disappointed and he didn’t feel like talking to anyone.

The next day, Lucas and Eddie visit the venues of the para-cycling, para-archery, boccia, para-powerlifting, wheelchair rugby and sitting volleyball competitions. After watching the wheelchair basketball match, they went to see para-table tennis and para-fencing, where, interestingly, the wheelchairs are attached to the floor.

When the Paralympic Games come to an end, the competitors and coaches all go to a big party where Lucas meets an Arctic fox who will be competing in the para cross-country skiing at the winter Paralympic Games in two years. Eddie explains to Lucas that there are lots of other winter sports to compete in, such as para-alpine skiing, para-ice hockey, para-biathlon, para-snowboarding and wheelchair curling.

Lucas leaves the Paralympic Games feeling inspired by everything he had seen, but also a little weary from all the excitement. After getting back home he decides to take the plunge and start training more seriously. Even if he didn't qualify for the Paralympics, he would have a lot of fun trying!