THE CREATION AND PURPOSE OF THE PICTURE BOOK

The picture book The Toothless Tiger, which talks mainly about the power of a reasoned argument, was created on the initiative of the National Council.

In practice, the term toothless tiger (paper tiger) mostly denotes those institutions in democratic countries which do not have real political power. Examples of such institutions are the National Council of the Republic of Slovenia, the Commission for the Prevention of Corruption, the Court of Auditors and the Ombudsman.

The aforementioned institutions nevertheless have power. They can show their »teeth« and loudly »roar« when they have convincing arguments. With such arguments, they can convince successive authorities to re-think their decisions and potentially make betters ones. In democratic countries with tradition, toothless tigers can even contribute to a change in government. 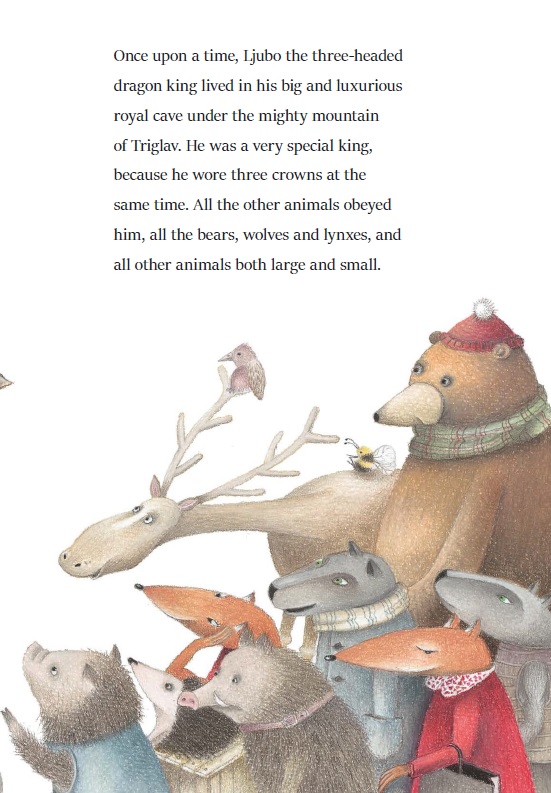 Once upon a time, Ljubo the three-headed dragon king lived in his big and luxurious royal cave under the mighty mountain of Triglav. He made decisions about all the important animal matters in his beautiful land. He always had the final say. Only now and again, the brave royal advisor Svetin the tiger dared to contradict him. Once the creatures realised that Svetin did not have any real power, they started calling him the toothless tiger behind his back.

Then came a year when the land at the foot of Mount Triglav was struck by misfortune. Water became scarce and although the ruler had good intentions, he made a poor decision. The animals complained, but the dragon did not listen. Desperate, they turned to his advisor, Svetin the tiger. Would Svetin be able to help the thirsty animals? Would he be able to prove that he indeed has teeth that are as strong and as sharp as mountain peaks?

In the story about Svetin the tiger and the dragon king, many parallels can be found with existing social and political conditions. Ljubo the dragon can represent the National Assembly and his three heads the political parties. The latter often hold completely different views on the same issue. As a unitary being, the dragon is forced to adopt compromises in the spirit of democracy. His name is not coincidental. Ljubo is an old Slovene name which resembles the name of Ljubljana – the economic, political and cultural centre of Slovenia, the land under Mount Triglav.

Svetin the tiger represents the National Council. In the realm of reality, the National Council consists of interests groups. Among them are representatives of employers, employees, farmers, craftsmen, independent professions, non-commercial activities and local interests. Interest groups often hold different views on resolving social, economic and other challenges. In the story, they are represented by different animal species.

In the story about the dragon and the tiger, I wanted to emphasis many values that are crucial for the successful functioning of contemporary democratic societies. Among them I wish to emphasise peaceful conflict-resolution, compromising, the possibility of a reasoned argument, fairness, equality, bravery, and wisdom. I especially wanted to highlight the value which is even written in the Constitution: high-quality drinking water. Climate change can cause great problems worldwide regarding the provision of drinking water of high quality. Slovenia is not an exception.